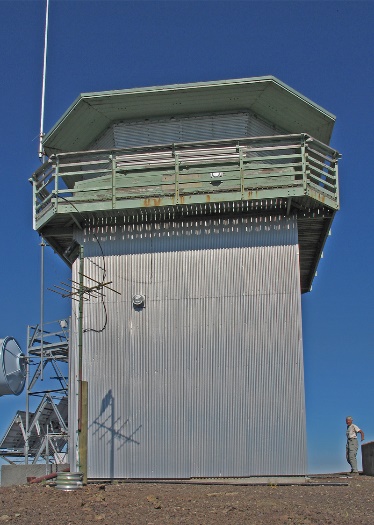 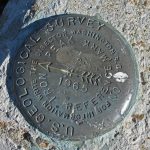 This metal lookout tower was built in 1953. Staffed by the California Division of Forestry when needed. Photos taken on June 23, 2006.

The original 1942 primary benchmark and both RM’s were destroyed due to grading. This RM #2 was found near the lookout. Placed in 1965.

December 23, 1925:  From the County Board of Supervisor’s December 1925 meeting:  “The State was authorized to use $500 from the balance left in the fire suppression and prevention appropriation to establish a fire lookout on Iron Mountain in Northern Mendocino County.”  (Ukiah Republican Press)

April 14, 1926:  “The State forestry department has recently redistricted northern California which will be classified as the North Coast district.  Forest Ranger R.E. Roach will be in charge of the work of the new district which will include a field lookout on Iron mountain near Laytonville and also a fire lookout on the Garberville Buttes.”  (Ukiah Republican Press)

June 3, 1927:   “Iron Peak road about seven miles long from Cummings to Iron mountain will be completed by June 1.  H.J. Hoff, contractor in charge, has completed his work of building the road, together with a lookout station under the supervision of Emmett Roach, fire warden of the seven northern counties.
Hoff has a contract for the road from Iron mountain to the Bill Chitim place about 2 1/4 miles east of the lookout station.
This will give motorists a good gravel road from Cummings to within a mile and a half of the Northwestern Pacific tracks towards the mouth of Woodman creek.”   (Ukiah Dispatch Democrat)

December 5, 1927:   “California’s forest lookouts on Iron mountain, Mendocino county, no longer face the possibility of being dispossessed by prospectors or other persons who might desire the 40-acre station site for mining activities or other forms of prospecting.  This has just been made certain by the state obtaining title to the land.
When the station was proposed last year it was discovered that the site was government land.  M.B. Pratt, state forester, didn’t want to have his men ordered off the ground while the fire season was on, so he had Surveyor general, W.S. Kingsbury, arrange a trade of state land to the government for the site needed.  This trade has just gone through and the state now owns the property.”   (Santa Cruz Evening News)

March 30, 1929:  “The first bill of Assemblyman Ingels that has been passed is now up to the governor and provides for the transfer of about 200 acres on the top of Iron Peak, northeast of Laytonville, from the government to the state.  This is the site of the fire lookout station for that section.  There is no objection to this bill from any source and the object is to keep some enterprising citizen from filing on it and then holding the county up.”  (Ukiah Dispatch Democrat)
October 20, 1926:  “The good work done by the Iron Peak look-out station is receiving much praise as no fires have occurred in this locality this year.  There is some talk of the center co-operating with the fire warden next summer in burning off the ranges and clearing them of the brush, thus making more pasture.”  (Ukiah Republican Press)

June 3, 1929:  “Iron Peak road about seven miles long from Cummings to Iron mountain will be completed by June 1.  H.J. Hoff, contractor in charge, has completed his work of building the road, together with a lookout station under the supervision of Emmett Roach, fire warden of the seven northern counties.”  (Dispatch-Democrat)

July 19, 1930:  “At the Iron Peak station, which is located nine miles northeast of Laytonville, J.E. Frazier is the lookout, and from this point there is a clear view of the entire northern portion of the county and part of Humboldt.”  (Ukiah Dispatch Democrat)