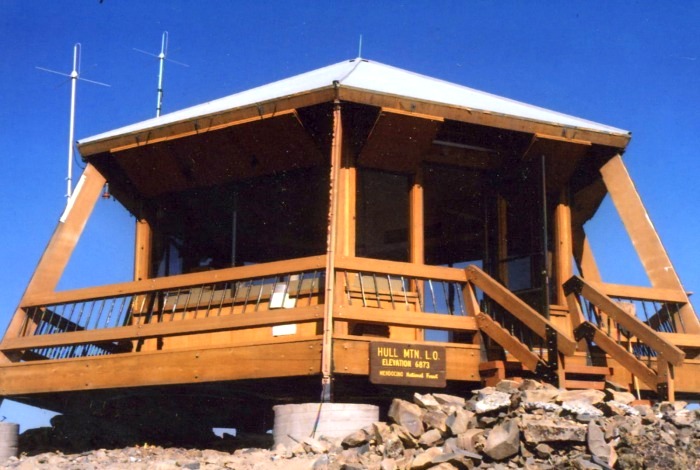 July 26, 1940:  “The remarkable view to be seen from the lookout station at the summit of Hull Mountain was one of the discoveries John W. Taylor, county superintendent of schools, made during a week’s vacation.  While standing in the glass enclosed lookout station at the 7000-foot elevation, one can see Ukiah and Round Valley, portions of Clear Lake and Lakeport, Mr. Taylor said.  (Dispatch Democrat)

September 6, 1940:  “One of the first things noticed by a visitor on Hull Mountain is what looks like a small airplane propeller revolving on a miniature steel tower.  You ask Lookout Charles Henry if this is some Weather Bureau instrument.  Smoky presses a button to show you he has electric lights in his house up here on a seven thousand foot peak, then explains that the contraption is a wind charger which supplies electric current for his radio and furnishes light for his house.  Henry purchased the wind charger four years ago, cost price in connection with radio purchase $15.00.  It is hooked up with two six volt car batteries and for four years has furnished all the electricity needed.  One battery is all that is absolutely necessary but Henry keeps two hooked up just to make certain of plenty of current at all times.  He states he has not spent a cent on the outfit since hooking it up four years ago.  Appears to be an effective and economical power plant.  Why aren’t they on all lookouts? Shouldn’t be necessary for the lookout to pay for them out of his own pocket.  –Harris – Mendocino   (California Ranger)

November 8, 1940:  “The following is copied from Ranger Floyd Long’s annual report.  ‘Our most unusual use of radio was on a lightning fire, one of a series, which occurred on the north side of San Hedrin in a very inaccessible country.  The fire could not be located after an extensive search by Suppression Foreman Foster and his five man CCC crew, but it was still visible to Hull Mountain Lookout.  Finally, Foster built a smoke signal in a safe place and the lookout readily picked it up.  Then by talking to the lookout via radio Foster got the direction and approximate distance to the fire from the location of the smoke signal and proceeded to the fire without difficulty.  (California Ranger)